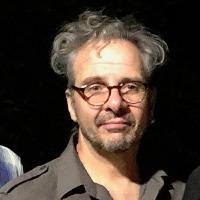 Self taught drummer, lead-rhythm and bass guitar. First band as a drummer at age 12 then switched to guitar at 15. He joined his first original band, THE LASTEST, in 1978 and had the great experience and pleasure playing the famed CBGB during the years the biggies were there. In 1984 he joined another original band, IBM. They also were a huge favorite at CBGB. IBM, a 4 piece went down to a duo where the songs took on a psychedelic approach.

Music was some how put on the back burner as Paul studied illustration and painting for galleries in the late 80's to mid 90's. This was an unsuccessful move and went back into music, mostly recording and playing his own songs. He was a Creative Director at the World Wrestling Federation during this period. When he left the company in 2001, music became secondary once again as he took up a new hobby: screenwriting and stage play writing. The plays were performed at festivals throughout NYC and Westchester, however music was calling him back. This time was different as he realized his playing had to step up many notches to satisfy his own ego. Still being self taught but now studying other players and learning different genres; this helped his playing while still keeping his own personal style intact.

In 2010 he was asked to join the all original band JAZMO as a bassist. This band has played venues such as Iridium and The Cutting Room, also in the final stages of recording an album with them.

Paul has put every effort into making sure his latest release, THE GREATEST HIT is all it could be. Apart from that, he is a hired gun as a drummer and working with many musicians in either live or recording situation... and loving it.