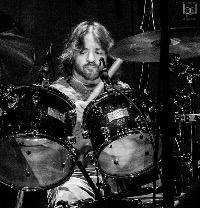 I first began playing the drums back in 3rd or 4th grade. I started with lessons provided by the elementary school’s music instructor, though these sessions didn’t last very long. After my 2nd and final lesson, I continued to practice until my practice pad finally caved. Undaunted, I simply found alternatives. Much to my parents’ dismay, my new targets were window sills, pillows, couches, table and counter tops, dining room chairs, cardboard boxes, and just about anything else that was a flat & inviting surface! After several years of this percussive home redecorating, my parents finally decided, “Enough is enough!”, and proceeded to enroll me in a summer music program. It was here that I resumed lessons for approximately 8 weeks with the junior high band director. Fortunately for me, he thought enough of my playing to invite me to join the junior high school band for my 8th grade school year. This eventually paved the way for me to become a member of the high school band. It was in high school that I became much more aware of and interested in the 26 rudiments, and I’ve been immersed in the pursuit of perfecting them ever since.

I consider myself very lucky and fortunate to have been provided the opportunity to prolong my involvement in my scholastic music programs, as they serve as one of the core reasons why I still play today. My experiences with junior high and high school marching/concert bands, orchestra, Broadway-type stage productions, and (especially!) jazz ensemble are an integral and invaluable part of my musical background and development. My high school jazz ensemble garnered most of my attention and interest, as concerts and competitions with this group provided me with some of my first (and very impressionable) experiences performing for audiences behind the drumset.

Within a year’s time of my high school graduation, I was enrolled at the University of The Arts in Philadelphia, PA, majoring in Music Performance with an emphasis on Jazz Studies. I studied there from January, 1991, until December, 1992. Attending UArts helped me appreciate and understand music in ways I couldn’t have previously imagined. I was, and still am, quite fascinated and involved in music theory, ear training, jazz theory, jazz improvisation, and composition.

During my last semester at UArts, I was growing more and more enamored with the idea of continuing my collegiate studies in New York City. I proceeded to audition for the Manhattan School of Music. To my amazement, I received my acceptance letter not long thereafter (still have it archived in a scrap book) and was informed that my private instructor would be the great John Riley. As a result of some unfortunate circumstances, I never ended up enrolling, though the accomplishment of being admitted is one that I am very much proud of.

I was first introduced to longtime Steve Vai band member Dave Weiner in early 2004, and have been playing drums along side in various capacities ever since. In addition to numerous performances throughout the United States, I contributed the drum track for the song Other Words For Beautiful found on Dave's 2010 release, On Revolute.

After meeting Dave, we both were introduced to bassist Rob Smith, and have been jamming/rehearsing/gigging as a fusion trio for the last few years. This instrumental project - titled Visible At Night (V@N) - is currently rehearsing new music in anticipation of our debut studio recording, as we are aiming for its release sometime later this year (2015).

My affiliation with Dave then led to me meeting Favored Nations guitarist Rob Balducci, whom I have played numerous shows with, including a performance at NAMM 2013. I was fortunate to have contributed the drums tracks for Castle In The Air, Step Into Liquid, and Ruled By The Moon - songs that can be found on Rob's latest release, 821 Monroe Drive.

As of January 2016, I have become the full-time drummer for Countdown To Ecstasy, a Philadelphia-based Steely Dan tribute band.