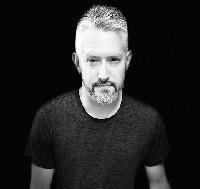 During his formative years, Dave began his musical path as a trombonist in marching & concert band while simultsanously studying drums and percussion with leading instructors in his hometown at the age of 13. Later, Dave would take on ambient sound design with a release under the name Neostra, titled Seven Colors. He is now actively composing ambient music under the name Noise Structures.

Dave composes heavily on drums & percussion, as well as with synthesizers in his home studio. He works as a session & studio drummer in addition regular projects. He occasionally teaches on a private level. His wide range of influences and experiences has given him the confidence to work in many styles and genres of music.

A favorite short-term project was with the 9-piece jazz group, 4tet & More. The group worked over four months in 2015 preparing to perform Bitches Brew, by the late-great Miles Davis. The shows took place at WV State University and at a local music club with positive reviews. TriElement was a trio (2007-2016) that had opportunities to share the stage with the likes of The Aristocrats, Neil Zaza, Soften the Glare, Sean O’Bryan Smith and Saul Zonana. Other past groups include MJ-X, The Nanker Phelge, Tape Age, Pale Nova, and several short-term projects. Finally, Dave has backed Nashville bassist, composer and producer, Sean O'Bryan Smith.

He accepted opportunities to tech for international drummers, Marco Minnemann, Todd Sucherman, and Gregg Bendian among others. He lent his talents recording drum tracks for the Charleston, WV version of the Evil Dead Musical in 2014. He has forged a friendship with booking agent Julie Cord of Blue Mouth Promotions, LLC, and has become a part of BMP’s house-concert network that brings world class musicians into a personal setting. Along with regional musician, composer and educator Chuck Biel, Dave founded Charleston Ambient Music and Musicians, a networking platform for ambient style musicians and a platform to promote live ambient music in Charleston, WV. Dave, Chuck and fellow artist John Marshall performed the inaugural show for the CBAMMS series on January 25, 2014, at West Virginia State University's EDC (Digiso).

Currently, Dave plays for Rel-X, a newly formed jazz-fusion quartet, the on-again off again trio Astro Chimp, and works as a session drummer for Columbus, OH, based The Pink Flamingos and Holly and the Byrd. Also, he will be working with the 2020 venture Tell’m Like It Is, primarily as a session drummer. This venture will work to bring together local and regional artists within genres such as Neo-soul, R&B, Funk, and Jazz among others.