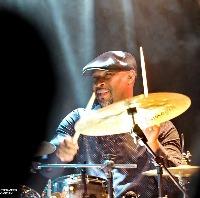 Born to famed Trumpeter, the late Pat Williams, Sr., and former Jazz and R&B vocalist, Rita Benson, Patrick was saturated in a home where all musical styles were welcomed and appreciated. At an early age, he developed a love for listening to and playing all genres of music, which to date has made Patrick one of Houston’s most versatile and most sought after drummers. Patrick is one of Houston’s few percussionists who is both comfortable and confident in a multitude of styles, and as such, has regarded him as a reputable mentor, teacher, and consultant to many upcoming young drummers, not only locally, but nationally as well.
Patrick has shared the stage with Joe Sample, Jeff Lorber, Bob James, Warren Hill, Eric Darius, Alex Bugnon, Mike Phillips, Tony Terry, Bobby Lyle, Kyle Turner, Regina Belle, as well as numerous cover bands locally.
Pat started his own band, The Pat Williams Group, in 2013 and since then, has put on numerous live music events; released a single; and is currently working on finishing his solo album.