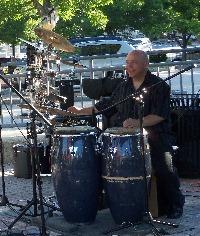 Actively involved with music for the past thirty Five years, I have developed a wide range of experience as a drummer, multi hand percussionist, and as an educator.


I have been a featured artist on over 400 commercially recorded works and have been produced by major as well as independent record companies. My drumming and percussion activities have included recording and performing along with several independent, as well as major, artists and producers. Some of my major credits are as follows:


Education has always been very important to me—both sharing and receiving. This has resulted in the formation of an educational program guide which includes group involvement workshops, lectures, master class, and individual instruction. The environment for me and my educational offerings runs the gamut—from toddler-age children to senior citizens, from day camps, schools, universities, community-based programs to working with professional music therapists and educators. The focus for me has always been to get the participants physically involved by playing the different instruments. I currently signed a licensing deal with Community Learning, a company that develops enrichment program curriculum. I have just completed a 15 week course based on my program "Making and Playing Percussion Out of Found Objects". It includes a Teachers Guide, Student Workbooks, World Map and all the Materials so that up to 20 participants can make 5 percussion instruments themselves that highlight the two basic families of percussion as well as the four elements of percussion. There is a DVD so that participants can be shown 3 different rhythms and the individual steps so that they can offer a public performance. The DVD was developed in such away that the Teacher does not have to come to the class as a musician. This tool makes it possible for anyone to teach the course.


With the many opportunities that exist to create a supportive role within the music industry, I have developed and started my own commercial business. The objective of my company is to design and manufacture custom stands for percussion instruments as well as custom design work for other instruments. I have been awarded three U.S. Patents to date, with additional applications being prepared.

My current product line includes:
The "How To" of Udu, An Instructional Book/Audiophile Package and Instructional DVD. These outline techniques (basic to advanced) for performance on the entire family of udu drums available. The DVD is manufactured and distributed worldwide by Alfred Publishing.

Percussion Instruments made out of Found Objects, A Workbook, Audiophile, Educators and Home Schooling Parents Reference Guide, Video. DVD will soon be available. The focus of these items outline several different projects that create percussion instruments out of found objects in ones environment as well as how to use this format to explore music, science, math, and humanities etc. These products are currently being distributed directly and through several different retail stores on the Northeast.

SoftPAW™ Performance Stands
Udu Drum — Twelve different stands are designed and available to support all of the currently available Udu Drums made by either Frank Giorgini, Udu Drum, Inc. or LP Music Group.
Earth Drum — Two different size racks are designed and available to support a total of six separate Earth Drums (3 on each rack). These drums are those manufactured by RPT Studios, Troy, NY.

Through Community Learning; a 15 Week Course including all course materials for up to 20 participants in the course kit entitled "Playing with Percussion"

"Divers Elements", a mix of solo pieces and duet pieces. The simple premise of this project was to create a body of music based on trading ideas with another person or coloring with a friend. One of us would record a musical idea then the other would respond to it. This idea of "call and respond" continued until it was obvious that the piece had evolved and made a statement. Simply put "we did not know where it was going, but we knew when it was complete". Very exciting process to experiment with. This recording is both available in the retail market as well as the commercial / industrial market through Gene Michael Productions. For commercial license, contact Gene Michael Productions directly.

"Art of Udu", a tribute to the udu drum this recording currently is only available as a commercial / industrial sound library format through Gene Michael Productions. There will be a typical CD format soon released as well as individual song downloads through several different online sources.

"uduboy" an enhanced cd celebrating my 25th anniversary of my work and ongoing love affair with the Nigerian Side Hole Pot Drum affectionately known world wide as the udu drum. With special permission from many very special and very talented friends I put together a collection of commercially recorded releases that highlight very diverse ways that I was able to present the udu drum to support their music. I also have a special addition featuring a movie that highlights my timeline and my contributions in supporting the udu drum.

"In Motion" a collection of pieces that integrate the organic sounds of world percussion and drum set supporting electronica, loops, pads, waves, and high quality samples manipulated into original compositions inspired for and by dance, dancers, aerobic dance and choreographers. The cd is laid out with no time between selections and a nice time frame to warm up to build up to an intense workout and down to a nice cool down period. I listed beats per minute in hopes that the user can develop their workout on the graduations in tempo if they so chose.


In 2013 while attending the international LEGO Convention "Brickfair", Chantilly, VA I designed and built the first ever LEGO Snare Drum. After completing it at home, I them completed the remaining of the drum set elements including Bass Drum, Mounted Tom and Floor Tom. In Jan of 2016 it was featured in Modern Drummer Magazine a leading global magazine featuring drums and percussion from around the world. Also in 2016 I gifted the second ever LEGO Drum Set to the international drum and percussion organization's PAS (Percussive Arts Society) Rhythm! Discovery Center & Museum's permanent collection, Indianapolis, Indiana. My LEGO Drum set has also been on display at one of USA's oldest art museum's, The Albany Institute of History & Art, Albany, NY.


It is very important to me to pass on as many good things as I can to help share, support, encourage, and even inspire those who come into contact with me.